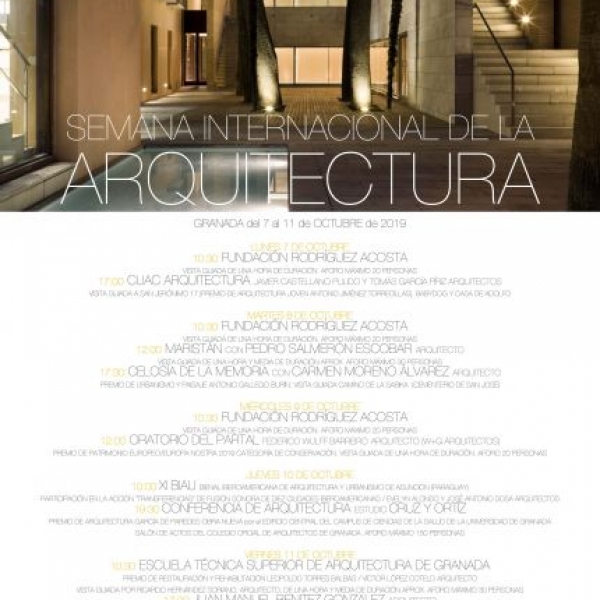 The College of Architects these days celebrates its week of cultural activities with an intense program of events in which it also seeks to open itself to Granada citizens.

Among the activities carried out for members but open to the general public, the Assembly Hall of the Official College of Architects will host this afternoon the conference of one of the reference names of the subject in this country: Antonio Cruz, awarded with García de Paredes New Construction Architecture Award for the Learning Center of the Campus of Health Sciences of the UGR university.

The architect explains that he will focus on his work at the Granada Health Campus. He will talk about the award-winning Learning Center building – which houses among others the paraninfo, the library, the study hall or the canteen – but he will also speak about his projects for the Faculty of Medicine and theMasterplan of the entire campus.

Although in Granada it has other reference buildings, such as the administrative building of the Junta de Andalucía in Almanjáyar, it will also add “some other work done by the study in relation to the university issue” outside this province.

In that sense, he advances that will show the Faculty of Sciences of Education in Seville. Also a contest won in Lugano, Switzerland, to make a university campus in the vicinity of the train station. And “although it does not directly have a university use but a cultural one, it will also talk about the Elena Infanta Library in Seville.”
The act, which will proceed to read the manifesto Architecture … housing for all, will also be attended by Luis Alberto Martínez Cañas, dean of the Official College of Architects of Granada; Noemí Sanchís Morales, president of the Andalusian Council of Official Associations of Architects; and Alicia Martínez Martín, Secretary General of Housing of the Junta de Andalucía.